Good morning, Internets! How’s this Thursday treating you? I don’t know about everyone else, but I’m really looking forward to this weekend. Sleep — oh how I’ve missed you!

This week’s story features a guy who’s missing more than a little sleep. Former gunman for the mob, Vince left everything behind when he ratted out his boss’s right-hand man to save his own skin. His new life as a protected witness might be boring as hell, but at least he’s safe. Or is he? 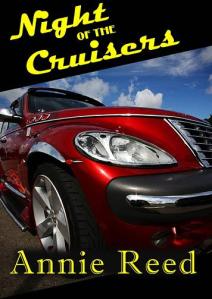 Night of the Cruisers

Vince saw the first Cruiser on the way home after a grueling day flipping burgers at the DQ on West Fourth.

He didn’t normally notice cars.  He noticed the people in the cars, a longtime habit leftover from his former occupation.  But cars?  They were nothing more than a way to get from here to there that wasn’t a truck.  Then again, Vince was a product of the city.  Out here in the west, everybody had a car.  Or a big-ass truck.  In his old neighborhood back east, only the rich could afford to own a car.  Working stiffs like Vince took the subway.  The only time he drove himself was when the boss sent Vince on a job and Vince had to steal some wheels to get the job done.  The only criteria then was a big trunk.

Bullets tended to shut a guy’s mouth up good.  Vince should know.  He’d popped so many guys over the years he’d lost count.  Then one day the boss started looking at him funny, like the boss thought maybe Vince had run his mouth too much around the wrong people.  Vince decided the wise thing to do was make a deal before someone popped him for knowing stuff he shouldn’t.

He might not have made the deal if he’d known he’d be stuck behind a grill in a Dairy Queen in goddamn Reno eight hours a day.  Some wiseass in the Witness Protection Program must have had a sick sense of humor, or maybe they were just tired of guys like Vince using the system to keep their own butts out of prison.  Why else would they stick a shooter like him in Nevada?  At least it wasn’t Vegas.  He would have been made in Vegas within a week.  In Reno it might take a month, six weeks tops.  Vince had been flipping burgers at DQ going on five weeks.  The only thing keeping his ass in place was knowing that no self-respecting wiseguy would walk around sucking on an ice cream cone that had a little curlicue on top, so Vince felt pretty safe.

Right up until the Cruisers started tailing him.